Zhejiangopterus is a pterosaur from Cretaceous era China.

The genus was named in 1994 by Chinese paleontologists Cai Zhengquan and Wei Feng. Thetype species is Zhejiangopterus linhaiensis. The genus name refers to Zhejiang Province and a Latinised Greek pteron, "wing". The specific name refers to the city of Linhai.

In 1986 a young chalkstone quarry worker named Xu Chengfa, found a large fossil near the village of Aolicun. Xu by letter informed the director of the Zhejiang Museum of Natural History at Hangzhou, Ming Hua, who from it understood the remains were those of an unknown pterosaur. Therefore he sent a team consisting of the describers and Wu Weitang to investigate. They secured the fossil, instructing the local population to be alert for possible further finds. Xu himself managed to find three more specimens before being killed in an accident in 1988; another worker found a complete skull.

Zhejiangopterus can be created in Jurassic World: The Game. After the June 11, 2015 update it can be fused with Tropeognathus to create the hybrid Tropeogopterus once both pterosaurs used in the hybrid's creation are Level 40. 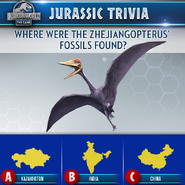