Egg
Zuniceratops is a ceratopsian dinosaur from the Turonian stage of the Cretaceous. It was one of the earliest known ceratopsians providing a link in the history of the group of dinosaurs.

Zuniceratops does not appear in any of the films or novels it does however appear in in a field guide from the now defunct Jurassic Park Institute.

Zuniceratops was planned to appear in the series during a stampede right to a Styracosaurus but it was scrapped. It can't be a Triceratops because there isn't a third horn.

Zuniceratops appeared in Jurassic World: Fallen Kingdom. This is its first appearance as a toy. 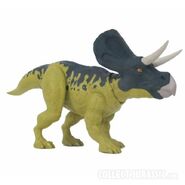 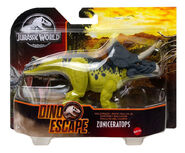